There’s a relationship between these names: a common thread relevant to our times and the world we all live in… 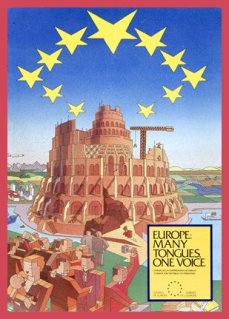 An EU Council poster. Note the caption: “MANY TONGUES, ONE VOICE”

Since President Obama pushed open the floodgates for immigrants into the US, erasing the legal/illegal distinction, and instructing border security to “stand down” and just watch and facilitate the invasion of the US by anyone who wanted to enter, any opposition to illegal immigration has been labelled “racism” and “bigotry”. As in Europe, big media companies slap frightening titles such as “far right” and “extreme nationalism” onto any political figure daring to even question the wisdom of opening the doors to all who want to come into the West, whether they’re vetted or not. 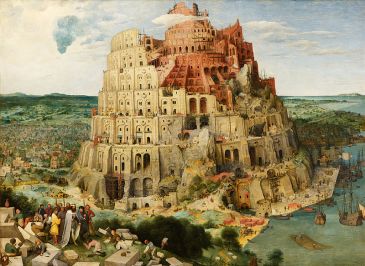 However, not just in the US but in Europe also there’s a distinct flavor to this new one-world culture being surreptitiously foisted onto all of us. The following is a quote from the official document from a 1991 meeting which outlines the Muslim Brotherhood’s strategic goals for North America:

“The process of settlement is a ‘Civilization-Jihadist Process’ with all the word means. The Ikhwan [Muslim Brotherhood] must understand that their work in America is a kind of grand jihad in eliminating and destroying the Western civilization from within and ‘sabotaging’ its miserable house by their hands and the hands of the believers…” (NOTE 1).

Given the above, why did President Obama frequently entertain the Muslim Brotherhood in the White House? Why did he smooth the path to Iran’s development of nuclear weapons, and why did he sweeten the deal with a billion and a half dollars of US taxpayers’ money without congressional approval? Why did he support the MB takeover of Egypt, dressed up as an “Arab Spring” by the media, which led to an immediate onslaught on the Coptic Christian population, and a strict imposition of Sharia law? (NOTE 2). Why is the EU drawing in so many of that same cultural background into Europe- in fact millions of them-the great majority of which has no intention of assimilating?

Hillary Clinton’s aim was to maintain the legacy and goals of Obama. She was the globalists’ dream-the one who would continue Obama’s push. But the election of Trump upset the apple cart, and unleashed a world of hate and fury by the media and by establishment politicians-Democrat and Republican. Even media and politicians in Europe were screaming “foul”. Donald Trump rocked the establishment boat-the boat quietly but firmly taking us all down their globalist river. That “swamp” that Mr Trump promised to drain turned out to be a lot deeper and more stinky than even he expected, and it’s attempting to suck him under.

On the other side of the Atlantic Europe continues to be changed into the image of a European “dream”, in which national identities and cultures are to be dissolved for a new one. And what will that new one be like? There’s no need to guess, because with mass immigration and the decline and fall of indigenous family and culture, population projections see Muslims as being the largest ethnic group within just a few decades in most EU countries.

The EU was intentionally founded to be a pre-global political organization. It’s a model and a stepping-stone for world government, in which national identities (but only those of the West) are erased. Europe and its planners cleverly knew that a top-down change would scare too many people at once. So what they did was maintain all the trappings of national government, and elections, while all the time superimposing global government on all. This of course is still in process, disguised as “sustainable development” and other euphemistic phrases.

In order to convince entire populations that what was happening was good for everyone and the only viable and desirable goal, education establishments and media giants continue to be shaped and manned to in turn shape the minds of the masses. And if we think we have no power at the ballot box now, dear reader, how will it be when our “leaders” have successfully thrown us into the pit of global government? If we think that politicians are out of touch now, and government entities impossibly monolithic and impervious, how will it be when one central power, somewhere, controls all things? Will our opinions matter then? The goal of global government; the aim of those promoting global citizenship, is that your individual rights will have no importance or relevance compared to your duty to the good of all. You will be like a worker ant: one of the many and totally dispensable.

To those of you who still think that world government is nothing more than the ridiculous conspiracy theory of semi-insane Christian fundamentalists, consider the United Nations organization, and UNESCO’s “Global Education First Initiative”. Knowing as Hitler did that the way to shape an entire nation was to “educate” its children your way, the GEFI is already at work in many schools in America and no doubt around the world. Point three of its three priorities in education is the following:

Many of the goals of those promoting global citizenship appear to be good and wholesome. But who, for example, is going to decide exactly what “social injustice” is (note 4)? To liberals, social injustice includes the fact that there are too many white people, and that it “isn’t fair” that some people get paid more than others do. This is communism. And so communism can pass, to many peoples’ minds, as “social justice”. Who will set the rules? The Clintons, who “should” have been elected, to the minds of establishment politicians and media people, are so enamored with the idea of global citizenship that they offer a related award annually (note 5). Don’t bother to apply if you’re white. 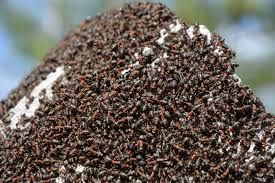 (THE TOWER OF BABEL?)

The subject of monolithic organizations brings me to an interesting observation, already made by many, of the similarity between the modern West and ancient Babylon. Babel was the Biblical city in which man intended to unify under one flag, metaphorically speaking:

Then they said, “Come, let us build ourselves a city and a tower with its top in the heavens, and let us make a name for ourselves lest we be dispersed over the face of the whole earth” (Genesis 11:4 ESV).

God had different plans. He did not want mankind to be united, because he knew that they would be united in opposition against him, which would be bad for them also. So he confused their language, and dispersed them over the face of the earth (verses 5 to 9). Mankind is currently attempting to reverse the work of God at Babel.

It’s incredible to discover that the EU likens itself in many ways to a successful remake of Babel, which of course is probably nothing more than a myth to its planners and architects. What isn’t a myth is their opposition to the Biblical God and his ways.

Also remarkable is the EU’s happy recognition of the mythical roots of Europe. According to a Greek myth dating back to at least the time of Homer’s Ilyad,  the god Zeus had the hots for Europa, the Phoenecian mother of King Minos of Crete. Zeus decided to seduce her. He transformed himself into a tame white bull, and managing to coax her onto his back he ran off to Crete with her.

(EUROPA ON A TWENTY-EURO NOTE)

The continent of Europe is named after Europa (no surprise there eh?). The European Union has been feeling the hots for Europa also, and has honored her in many ways-on EU money, for example.

However, it’s not just Europa who is honored, but the entire myth also. Outside the EU Council building is a statue of a bull wildly galloping along while a naked woman clings to his back.

So what, you may ask? What’s the significance? Is there any significance to the EU council’s use of a well-known painting of Babel in their literature, and their statue of Zeus carrying naked Europa on a wild ride? Couldn’t it perhaps just be that some sarcastic artist/ designer was aware of the view of some in the evangelical world, and so he wanted to tweek their excitement as a little joke?

In the eyes of some fans of Bible prophecy, the myth and the statue are in close similarity and relationship to a reference in the book of Revelation, in which a woman-“Mystery Babylon”-is seen to ride a “beast”, the very beast destined to rule the earth economically, politically and militarily. (Revelation chapter 17). More than that, it is considered by the same students of eschatology that according to prophecies in Daniel and Revelation Europe is destined to be the final kingdom to rule the earth, making its unification most significant in the light of other apparent “signs” of the nearness of end-times events.

Obama warned of a “blood-bath” were “Brexit” to succeed (note 6).

I confess to having been once completely convinced that the EU entity was to be the kingdom of Antichrist. However, over several years I’ve modified my view of the situation somewhat.  I think the kingdom of the beast will/ already does extend overseas, if you get my drift. I also believe that the movement of vast numbers of Muslims into the West is part of an elite plan to weaken and water down the influence of Christianity, so that the architects of antichrist’s kingdom can work more easily.

Perhaps most interesting is the fact that the EU seeks to dismantle borders and to foster and promote world entities, and ultimately world government. Of course many in the US and around the world are on the world-governance bandwagon. It’s a fact which is compelling in relation to prophecies of world government, and especially that prophesied world government’s opposition to genuine Christianity and the nation of Israel. These facts meet in an incredible “coincidence”, if that’s all it is, but I don’ t think it is coincidence.

I certainly do not agree with the notion of a few wackos that Donald Trump is the antichrist for many reasons. One of those reasons is that he is hated, not loved, by the globalists, by the wealthy elite who pull all the strings-including the media strings- who wish to blend all the nations and ethnic groupings together, and who want to drag the world into an anti-Christian perversion of God’s creation. They are under the spirit of Antichrist, and they are opposed to Trump.

To keep those of you who have managed to read this far in a little suspense, I think my own expectations of Antichrist’s kingdom must be discussed in another post, this one being already monstrously long. Having said that, it’s my opinion that Europe is only a part of the last-days kingdom; a little warm-up for the real thing. According to two passages from Revelation, we cannot know the form of that kingdom in any clarity until the beginning of the last three and a half years:

And the ten horns that you saw are ten kings (or kingdoms) who have not yet received royal power, but they are to receive authority as kings for one hour, together with the beast (Revelation 17:12);

The beast was…allowed to exercise authority for three and a half years (13:5).

2: The Obama administration’s policy of backing the Muslim Brotherhood was outlined in a secret directive called Presidential Study Directive-11, or PSD-11 https://www.washingtontimes.com/news/2015/jun/3/inside-the-ring-muslim-brotherhood-has-obamas-secr/