“The oceans will be as dead as Lake Erie in a decade”. So said a Stanford ecologist in 1970. He also declared that “America will be subject to water rationing by 1974 and food rationing by 1980”. 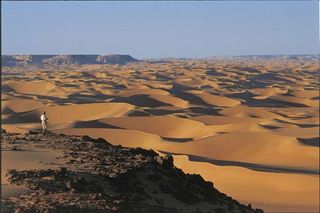 Now, I’m all for having a clean environment and for eliminating waste (so let’s get rid of half of the government) but unless the Buddhists are right, we still exist in 2019, as large as life and twice as potent. Let’s drink to it, with a large glass of clear water…and then go out for a meal at any one of the multitude of restaurants around us, all brimming with food…including fish.

The above quotes are contained in a collection of similar doomsday predictions given over the last fifty years by… experts (see note 1). Ooh-experts! (Did anyone read my post titled “Ex-ing the Experts”?)

Another dire prediction contained and documented in the collection, first made in 1971, was that the earth was about to enter a new ice age. I can actually remember this warning being given. One expert making this prediction was working for NASA and Columbia University at the time. He said that the use of fossil fuels was blocking out sunlight to the earth, which would lead to the earth cooling dramatically within fifty years. In 1974 the Guardian’s report on this problem declared:

“Worldwide and rapid trends towards a mini ice-age are emerging from the first long-term analyses of satellite weather pictures”.

So from 1971 we have two years to go until the ice age begins, right? Wrong. Within fifteen years of predictions of impending arctic conditions, the experts were onto global warming. Who remembers that? And who remembers all the talk in the eighties of the ozone layer being rapidly diminished, which would quickly lead to all of us frying and life on earth ending? Whatever happened to the ozone layer?

But now it’s “climate change”. Simple warming couldn’t be detected by we, the unwashed, ignorant masses-especially during winter. So in order for those who wish to control us, and those who are genuinely duped to get at least half of us on their side, the idea of changing weather must be introduced, because it’s a more tangible phenomenon, even though weather and climate has been changing since the beginning of time. Bob Hope, a famous comedian in the fifties and sixties, said that “England is the only country where you can get all four seasons in one day”. Having spent thirty years in England, I know exactly what he meant. And there are some who are certain on an especially hot day that the earth really is going to burn unless the United States distributes all its money around the world.

For one example of real climate change, consider the Sahara desert. It was a fertile land (see note 2) only a few thousand years ago, and its desertification cannot by any stretch of the imagination or misinformation be blamed on Western industrialization or progress.

The earth’s climate has changed so dramatically during its history-before any industrialization- that fossilized palms and hippos and camels are found a long way north. Read any account of earth’s history according to evolutionists and they’ll tell you how much things can change. Just look at the last ice age (in my view, the only one). Where we now live and bask in warmth for half the year glaciers, ice and snow thousands of feet deep blanketed northern latitudes for hundreds of years.

In my several decades on this planet, while we did indeed sometimes see all four seasons in one day, I’ve seen no noticeable change in the climate. But the blame for the destruction of the earth and the bill to right nature is being handed to the United States and the West (in fact, to the hard working tax-payer) when the US is one of the cleanest nations in the world.

We are being hoodwinked, and millions of young people are being terrorized by apocalyptic predictions. This is being done for the sake of political gain by a certain party and those of the same political and social philosophy, and for the dream of overturning a way of life and replacing it with a mythical socialist utopia.