Unbelievers scoff at miracles recorded in the Bible. God “…doesn’t have a magic wand”, as one extremely well-known church leader recently put it. One reason they don’t believe in miracles is that they can’t do them…

(Healing the Paralytic at Bethesda, by Palma Giovane, 1591)

Moses could not have crossed the Red Sea, they will say: it must have been the knee-deep “Reed Sea”. Jesus couldn’t have been born to a virgin, he couldn’t have turned water into wine, and he couldn’t have risen from the dead. None of these things really happened, according to them, because such things are impossible.

In order to accept that miracles really do happen, the skeptical scientist requires that God, Moses and Jesus request appointments in his lab so that they can be examined, tested and experimented on. They would have to perform their “tricks” under control conditions, in full view of the cameras, equipment and instruments.

Granted, the scientific method rightly requires empirical observation before we can know for sure how the world really works. But the whole point of a miracle is that it is…well…miraculous. Miracles are not a normal part of every-day life. Miracles are out of the ordinary and rare. They are uncommon: not just anyone can do them.

Miracles are a negation, or a temporary suspension of the natural laws which govern our physical universe. Perhaps they’re the employment of an alternative set of laws which we’re unaware of. And as God, in the Biblical view of things, created the entirety of the physical realm (Genesis 1:1) and continues to sustain every little bit of it (Colossians 1:16-17) he must not be subject to its laws, but instead he’s in control of them, so that he’s able to manipulate them. A portrait, the work of an artist or photographer, can’t create another character: the artist and the photographer can.

Ah, but miracles just don’t happen, according to the naturalist. Is that really so? I wonder how many unbelievers have seen all events of all time in every part of the universe, so that they can say with confidence and scientific certainty that a miracle has never happened? I’ll wager that none have. Could it be possible that they’ve missed something? Could it be possible that the Creator has decided not to perform for the satisfaction and curiosity of the skeptic and the cynic? Could it be that He feels no obligation to make that appointment at the lab? Could it be that he will not stoop to the whims of unbelieving, rebellious man, when all the evidence of his creative, miraculous power is already right in front of their eyes, and at the center of all their formulae and calculations, day in and day out?

If only we had eye-witnesses to miracles! Then we could believe-right? Well excuse me, we’ve had eyewitness…refer to John’s gospel for example. But the contemporary unbeliever doesn’t want to accept the testimony of the Christian gospels. One evidence of Biblical miracles is the fact that large numbers of first-century believers who claimed to be eye-witnesses were prepared to die spreading the gospel if necessary. Modern “martyrs” kill other people: first century martyrs risked their own lives, something people don’t do for something they know to be false. 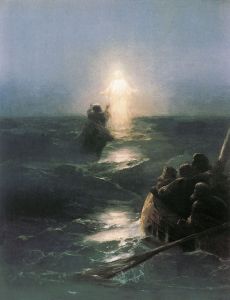 Have I seen a miracle? I believe I have. Outside of the fact that all of life is unfathomably complex and intricate and beautiful, so that men are “without excuse” for ignoring God (Romans 1:20) I believe I’ve had some answered prayers in my life which can’t be explained any other way but by divine intervention in my very own part of the physical universe.

So the evolutionist and the naturalist is convinced that miracles have never happened anywhere, on the basis that they’re sure they’ve never observed one. When did anyone observe a cow turn into a whale, or a lizard turn into a bird, or a few chemicals turn into a bacterium, or a gas cloud turn into a star (1)? I can answer that one: “ never”. These things have never been-and can never be-observed by scientists. Yet most of them believe that such things have happened in the past and continue to happen-when we aren’t looking.

No, we don’t observe creation happening today, because on the sixth day God “finished” his work of creation (Genesis 2:1-2). No, we don’t see water turning into wine today because the one who is able to do such a thing isn’t among us, and did it not to begin a trend or a habit, but to show exactly who he was and who had sent him. No, we don’t see everyone being healed today because mankind is in rebellion against God, and God’s holiness will not allow him to “fix” everything that’s wrong in the world just so that we can continue on our own rebellious way and in our own direction. No, we don’t see Jesus rising from the dead, because he’s already risen.

The greatest miracles being done today involve the changing of lives. I’ve experienced such a miracle myself. I know that when a person decides to agree with God that he or she is a sinner in need of repentance and forgiveness, and when he sincerely accepts the gospel message that God has given us concerning his son, he is miraculously changed for ever, and moves into a relationship with him.

Search my posts on the gospel…