Tails up all those who think we’re related to chimps, or descended from ape-like creatures. No monkeying around now…

Despite all the propaganda and speculation foisted onto me at school and through television I have never for a moment believed that I was descended from ape-like creatures. As a kid I wondered why pre-humans would shed all their ape-like fir and then shiver in the cold and start making clothes. I must admit though, that sometimes I can’t help appreciating why some people believe they have ape in their ancestry…

Here are a few related tales. This post is an edit of something I wrote four years ago, and which I thought deserved another airing.

At a creation seminar I attended, given by ex-evolutionist Dr. Tommy Morton, the audience was shown part of a PBS (equivalent and sister to BBC TV) “Nova” special on Lucy, one of the alleged evolutionary links between an ape-like creature and humans. For us all to see and hear, Nova’s narrator explained how scientists had decided that when fossilized, the hip had somehow been fused in the “wrong” position, so that the remains made the animal look like it walked too much like an ape, and not much like the link they believed it to be. So, in front of the camera, the scientist cut the joint and fixed it in the position he believed it was originally, and hey presto…it’s a genuine missing link, touted and promoted by public television for millions to see! Don’t think for a minute that this type of scientific “research” is rare…

A few years ago I played escort for a party of people on a trip to the “Chimpanzee and Human Communication Institute” at Central Washington University. The institute’s website makes the claim that chimps living there have “acquired the signs of American Sign Language (ASL), and use those signs in conversations with each other and their human companions”. This “accomplishment” apparently has resulted “in a better understanding of ourselves, as well as our place and role in nature”. The site also refers to the chimps as “our fellow apes” (hey-speak for yourself and count me out!)

I can remember seeing the first chimp to “acquire a human language”, on TV in the UK. Her name was “Washoe”, born in 1965. Washoe was the matriarch of the CHCI family at CWU. Even at the age of twelve it seemed to me that there was something not quite right about the link they were making between us and the chimp’s mimicking of gestures.

Anyway, when my party and I arrived at the institute, and before being allowed to see any of the chimps, we were given strict instructions on how to behave in front of them. We were told to stoop and not to stand erect, in a gesture of peace and deference.  We were given one or two simple hand signs in order to have some basic communication with them. And we were told not to reveal our teeth: a toothy smile was a serious no-no, as this is a sign of aggression to chimps (wait a moment – I thought they were supposed to be becoming more like us, not us more like them!)

Once inside the enclosure, we were all extremely relieved to bear in mind that there was a thick, shatterproof glass wall between us and those rather large chimps, because with one accord they decided that instead of having a nice chat about the weather, or the latest football scores or stock market report, they were going to make us jump out of our skins by charging at the glass and hammering on it with all their might. The glass boomed… everyone gasped and jumped back, then after a few seconds laughed nervously, realizing and hoping that that glass barrier would keep us apart from animals which were capable of ripping our limbs off. 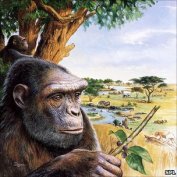 In 2002, researchers at Plymouth University in England were so inspired by the belief that a million monkeys poking away at typewriters for a million years would generate the entire works of Shakespeare, that they decided to go at least some way towards proving it. They left a computer in a cage with six macaque monkeys at Paignton Zoo for a month.

The best that could be said about the following achievements of the monkeys is that they had a very effective stint at typing S’s – pages of them. However, rather than sitting down to get to work on a literary masterpiece, the lead male decided to “bash the hell” out of the keyboard with a rock, as one researcher put it. The male and the other five also took great pleasure in urinating and defecating on it.

“Even the simplest English sentence of the “See Spot run” type is beyond the capabilities of real monkeys, no matter how long you give them” 1

As far back as the 1960’s, there were a number of individual not involved in scientific research, who had independently arrived at the conclusion that they were indeed close relatives of chimpanzees. In fact, they were so sure of it that they formed an association to affirm their heritage, aptly named “The Monkees”. Before long they had written an anthem to celebrate their shared beliefs and characteristics:

We ARE the monkeys!

People say we monkey around,

But we’re too busy singing

To put anybody down!

The research on this topic has progressed since I wrote the summarized info below four years ago. Please see note 7 for a link to a 2017 update. This is slightly technical: sorry about that.

For several years now we’ve been told there is conclusive evidence that human and chimp DNA is 95 to 99 percent similar. The evolutionary concept is that apes, particularly chimpanzees and humans, descended from a common ancestor.

In the “chromosome 2 fusion  model”, researchers claimed that two small chimpanzee chromosomes fused at some time in the not so distant past, forming one large stable chromosome, which is “why” the great apes have 24 chromosomes and humans have 23. The evidence that led them to make this conclusion was that there was a cluster of “telomere” sequences in the middle of human chromosome 2. Since telomeres were originally considered to be only at the ends of chromosomes, and that they serve only as a kind of “cap” on the chromosome, researchers concluded that this cluster was evidence for the fusion model.

At the Institute for Creation Research, Dr. Jeffrey Tomkins, with a PH. D. in genetics, and Dr. Jerry Bergman, a professor at Northwest State College in Ohio, have been following the secular research and resulting claims closely, and have carried out extensive studies of their own from the standpoint of the creationist. In 2011 they reported that they had found that telomeres are not unique structures only present at chromosome ends, but that there are in fact many telomeres, telomere clusters, and telomere repeats throughout the genome, often within internal regions of human chromosomes (3).

In 2012 Tomkins and Bergman authored reports in the Journal of Creation on the human-chimp DNA question. The first reviewed relevant secular science literature. Their own analysis detailed many differences in genomic DNA, gene regulation, regulatory DNA features, micro DNA code and gene splicing.

The second paper examined secular research methods and discarded data. It concluded that:

“All analyzed cases of reported human-chimp DNA sequence similarity is based on biased data selection and exclusion techniques. DNA sequence data that is too dissimilar to be conveniently aligned are omitted, masked, or completely excluded. Furthermore, gap data within DNA sequence alignments are typically omitted, further biasing similarity estimates”

“These highly selective data-discarding techniques, fueled by Darwinian dogma, lead to the commonly claimed 98 percent similarity between human and chimp”

The authors concluded at that time from their own analysis that the two are not more than 81-87 percent similar (4).

In January of 2013, Dr. Tomkins wrote a report titled “Epigenetics Proves Human and Chimp are Different”.

Epigenetics is the study of how DNA has been modified in such a way that its chemistry has changed, but not the actual base pairs that make up the genetic code of the sequence. Recent studies have shown dramatic differences in human and chimps in regard to epigenetics, particularly in a process known as “methylation”. This difference is recognized by secular researchers (5).

“For the primary chimp chromosomes (autosomes), the amount of optimally aligned DNA sequence provided similarities between 66 and 76 percent, depending on the chromosome…”

“These results illustrate the genetic and biblical fact that humans are not just another primate, but are uniquely created in the image of God” (6).

This Bible passage comes naturally to mind, in which major signs of the decline of a civilization are outlined:

“Although they claimed to be wise, they became fools…They exchanged the truth of God for a lie, and worshipped and served created things rather than the Creator – who is forever praised, Amen” (Romans chapter 1, especially verses 22, 25).

3 “Acts and Facts”, a monthly publication of the “Institute for Creation Research”, Dallas Texas, (www.icr.org) May, June and November 2011 copies

ICR gives you a free subscription to Act and Fact – a great creationist magazine: