When I was eight years old my fourteen year-old brother, who had a mechanic’s mind and not a scientist’s, asked me what I thought was at the end of the universe, and what was on the other side. If there was a brick wall, he said (jokingly) what would you see if you looked over it? We came up with some funny ideas, not knowing the current scientific understanding that there is no outside to the universe. There is no outside! Beyond the boundaries of our universe, there’s no space, no matter, and no time. There’s not even a McDonald’s restaurant!

The secular view until the 20th century was that our universe was eternal. The advent of the Big Bang theory brought a beginning, but it still sounded a little too much like creation, and with the knowledge that conditions had to be more than perfect in a multitude of ways to create life, multiverses have been invented. But not only is there no evidence of them, this isn’t even science, because a scientific fact is something which must be observable and which can be reproduced by experiment. This is philosophy; hypothesis; faith; hope; speculation. We can’t even see to the end of our own universe, let alone see outside of it, and we certainly can’t create a universe in the lab.

However, even if we imagine a multiverse scenario where a multitude of universes exist simultaneously, outside of those there’s nothing-not even space. So we might ask just how far this “nothing” goes on, and the strange answer is that it doesn’t go on, because nothing cannot go on. We can’t conceive this: surely even nothing is something, if only emptiness! And how far does that nothing go on-and what’s at the boundary of that? Does it go on endlessly? Considering an end to all material things; a boundary or a beginning, is a little like asking where God came from. We’re all up against….well…a brick wall.

If we imagine that there is an infinite number of universes, we should perhaps ask ourselves the question, “Where did the infinite number of universes come from?” If they were born from each other, where did the first one come from?  We’re now back to square one, wondering how that first universe came into being, and where it came from. Into what did it come to be, if there was nothing at all, not even emptiness? What exactly became our universe: nothing? Really? I can barely pick up one large rock, and that came from nothing? Surely, there must always have been something there, wherever “there” was.

We’re faced, then, with the fact that it’s no more logical to our minds to have a natural beginning to all things than it is to declare the following:

God is infinite, and never had a beginning! Nobody made God!

As limited as we are in our concept of infinity, we cannot escape it. Descartes, the famous French philosopher reasoned that we must have an innate; a built-in sense of infinity, because we do not experience it in our limited world.

Humans have become very clever in many ways, but no matter how clever we become, there will always be some things we don’t know. If we did know everything, we would be God. Then, believing in evolution from nothing, we would have to declare that God came from nothing…! There’s the answer for you determined atheists out there! 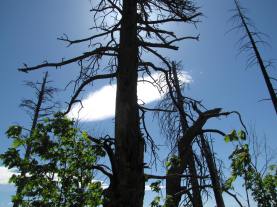 To the atheist, the universe created itself and expanded to its current size and shape. X billion years later, here we all are wondering where we came from (hence the multitude of religions, including evolutionism) composing symphonies, producing babies with billions of functional brain cells, and killing each other.

The first verse of the Bible states that “In the beginning God created the heavens and the earth”. In that one verse, written many centuries before Hubble and Einstein, we can see time, space and matter having a beginning. This God obviously had to be outside of space and time, and therefore infinite. This is the claim of Scripture: God had no beginning, and will have no end. It’s no more difficult to accept that than to accept that there was once nothing existing-or rather not existing-for ever.

The Bible also declares in many places that God “stretches out the heavens”. The Bible, which claims to be the word of God, was well ahead of the big-bang theory.

People have asked me, “Who made God?” or “Where did God come from?” in such a way as to expect me to drop my jaw in speechless consternation, and to proclaim in contrite submission that there must not be a God after all, we must have all evolved from nothing. However, the atheist is no nearer to understanding the origin of all things than I am to understanding the origin of an eternal God. Both atheist and theist alike are stuck with the twin questions of eternity and a first cause.

When I’m asked “Who made God?”, I first acknowledge that eternity is one thing I do not understand, and an eternal being is out of my league entirely. I don’t really understand where I came from, let alone an eternal God. He has not attempted to give an account of Himself to me, and He has no obligation to do so. If God tried to explain himself to me, I would not understand. 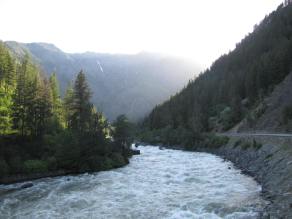 Imagine attempting to explain to an ant how Einstein’s relativity works, or how an F-18 can fly at twice the speed of sound, or what inspired and enabled Beethoven to compose his Sonata No.14 in C. The ant, as far as we can tell, would probably not understand the answer, or even notice that we’re trying to tell him something, as he busily tugs on a twig or a grain of dirt. Our thoughts, words and activities are entirely beyond his little world. Similarly, there are things we humans just can’t comprehend, whether we like it or not. Eternity is one of those things. Perhaps that little ant would not be any more interested in what we’re trying to tell him, than we are interested in what God is already trying to tell us now…

(This post is a greatly edited version of the original, published February 4th 2011).