Welcome back to excerpts from my book “All Left Behind: The Case Against the Pre-Tribulation Rapture”. I was once a zealous defender of the pre-trib. rapture, but came to see things very differently when I eventually faced up to certain scriptures I had previously ignored, and analysed them more realistically. Here then is installment 6, which considers the doctrine of Imminence. 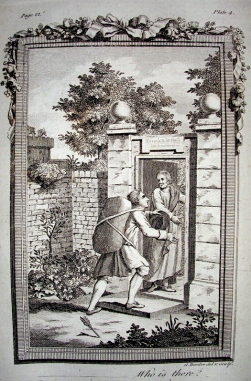 Pre-tribulation believers say that Christ’s coming is ‘imminent’. In the context of the rapture those who use the term mean that Jesus could come back secretly at any moment, just for his Church, without any warning or notice; leaving everyone else including nominal believers behind. There’s nothing else which needs to happen “on God’s prophetic clock” before the rapture, they say. Seemingly in support of this view are the words of Jesus who said we cannot know the day or the hour of his coming (Matthew 24:36-42). He said he is coming “quickly (KJV)” or “soon” (NIV, Revelation 22:12).

According to the doctrine of Imminence, if we were to see any of the tribulation signs of his coming we would be able to know he’s coming and when he’s coming. But this cannot happen, since Jesus said he would come “like a thief in the night”. Therefore his secret coming must happen before the “seven year tribulation”. If we saw the “signing of the peace treaty” we would be able to calculate the day and the hour of his coming, but Jesus said we cannot know the day or the hour-therefore we will not see it. Instead the Church will be taken in a surprise rapture before the “peace treaty” is signed and before the tribulation begins. Don’t even question the doctrine of Imminence, they insist: that’s very nearly heresy. Imminence is presented on one web-page in defense of the pre-tribulation rapture as “the grand-daddy of proofs”.

Admittedly, it’s clear from Jesus’ own words that we cannot know the day or the hour of his coming, so it’s inarguable that his coming truly is “imminent”. However, the application of imminence to the concept of a pre-tribulation rapture does not stand up to close scrutiny.

Pre-tribulation teachers will say, as they must, that most of the content of the Olivet Discourse is intended for a Jewish believing remnant who will be around during the tribulation while the Church is in heaven, and not for the Church. Yet it was during that discourse and to those same believers that Jesus said these commonly-quoted lines:

“No one knows about that day or hour, not even the angels in heaven, nor the Son, but only the Father” (Matthew 24:36) and;

“Therefore keep watch, because you do not know on what day your Lord will come” (Matthew 24:42) and;

There’s something wrong here. Why would Jesus say “you do not know the day or the hour” to the very people who the pre-tribulation believers say will be around during the tribulation, if that warning is intended to support a pre-tribulation rapture? Pre-tribbers tell us that these quotes mean the rapture is imminent and so before the tribulation, but in fact Jesus is saying these things for the benefit and instruction of the people who will be living on earth during the tribulation! Jesus wasn’t even talking to believers who might be gone before the tribulation when he said, “you do not know the day or the hour”. He was talking to his disciples about his visible, physical coming in power and glory!

If Jesus was talking to early rapture candidates in his Olivet Discourse, wouldn’t he have said something like, “Fear not, because I”ll take you away before such things happen”.

There’s more. Here’s another quote from the same passage:

“So when you see standing in the holy place the abomination that causes desolation…” (24:15).

By the reckoning of pre-tribulation teachers, the people Jesus was addressing in his Olivet Discourse-the Jewish remnant- should also be aware of the “peace-treaty” they say will be made, and of the rebuilding of the temple. So presumably under the logic of Imminence theory, they would then be able to calculate the day and hour of his coming! But Jesus told them they could not know the day or the hour. It’s faulty logic and just plain wrong to say that if believers were to see any tribulation events occur, they would be breaking the words of Jesus when he said we cannot know the day or the hour.

It’s important to note at this point that Jesus didn’t actually mention any “seven year peace treaty” in his “Olivet Discourse”. Why not? Did he forget? Did he not think it was important? Did the translators leave it out?

When Jesus said “No one knows about that day or hour…” (verse 36) he had, moments before in verses 28-31, been speaking about his physical, visible appearing in power and glory for all the world to see-not about a secret rapture. He was saying this at the time he gave the discourse in the first century, and even in our time now, nobody knows exactly when he’s coming. As we’ve seen, even during the future time of distress he described in Matthew chapter 24, it seems people will still not know “the day or the hour” of his coming. We can look, and we can expect and hope, and we can see certain events which suggest the time is near, but no-one, then or now, or in the future, can know the exact “day or the hour”.

Strangely, the same people who say that “nothing needs to happen before the rapture” will tell you that there are plenty of signs of the coming tribulation to be seen now, and they proceed to publish books and videos and TV shows about those very signs which they are clever enough to divine. They’re the “watchmen on the wall”, and so make a good living telling the rest of us what prophetic signs have been fulfilled, while also telling us that the coming of Jesus is imminent and nothing else needs to happen before the rapture. If it’s imminent to the point of us not having a clue about the time of his coming, and if “nothing else needs to happen before the rapture”, what’s all this talk of signs being fulfilled? Why does the “Imminence” principle have to be applied to a pre-tribulation rapture only?

Thanks for reading. This subject will be continued in a few days.