Welcome to this excerpt of my book on the rapture*. I want to reiterate that I am not a-millennial in my views, and I do not go along with any replacement theology. I was zealously pre-tribulational for twenty-eight years, until my eyes were opened to reality… 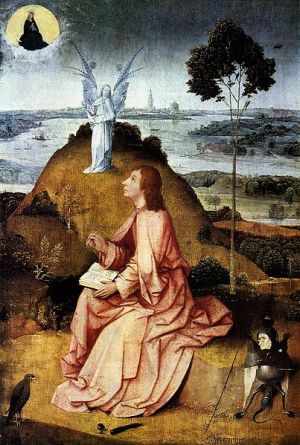 The apostle John’s life was greatly blessed in many ways. And though he was, during his later life, exiled to a small island as a form of persecution, even there God blessed him enormously with the privilege of the Revelation of Jesus Christ, recorded in the last book of our Bible. As John is the one who was given the Revelation, and “the one who Jesus loved”; who wrote one of the four gospels and some incredible letters too, it seems obvious that we ought to be able to glean some clues as to the timing of the rapture from his writings. These notes are updated from previous blog posts on the subject.

IS THE CHURCH MISSING FROM REVELATION CHAPTER 4 ONWARD?

The first three chapters of Revelation contain letters to seven churches from the risen, glorified Jesus Christ. They’re initially addressed to seven individual first-century churches, but many pre-tribulation teachers and believers see these letters as also relating to later ages of the universal Church, so that one way or another they encompass the entire “Church Age”, which they say is from Pentecost to the rapture. In relation to the rapture, they insist that while the Church is spoken of in the seven letters, the words “Church” and its local version “church” are nowhere mentioned in the rest of Revelation, which covers the Tribulation. This is taken as evidence that the Church will no longer be on the earth during that time: it will be in heaven watching the events of the tribulation in safety from there. After all, why would Jesus Christ speak so openly to the churches in the first three chapters of the Revelation, and then have nothing to say about them or to them after the letters, if Church-age believers were to be in the middle of all the prophesied turmoil?

Our first remarkable observation in answer to this belief should be that the words “Church” and “churches” are not used to describe anyone in heaven during the tribulation events in Revelation either! Why do pre-trib teachers never point that out? So where is the Church? Where are the “churches”?

I Jesus have sent my angel to give you this testimony FOR THE CHURCHES (Revelation 22:16).

THE ENTIRE BOOK OF REVELATION IS A TESTIMONY TO THE CHURCHES!

Jesus said that the entire book of Revelation-not just the first three chapters-is a “testimony” for the churches. A testimony is evidence; proof; a formal statement. We first hear of this “testimony” at the beginning of chapter 1, where we’re told that Jesus Christ’s revelation is concerning “what must soon take place”. Therefore the testimony includes not just the seven letters but all the following prophesies. The entire thing is, “…the testimony of Jesus Christ” (verse 2). The churches-supposedly representing the Church age only-are provided the same “testimony” as those who are martyred during the Tribulation in the rest of Revelation.

So one message is told throughout the book. There are not separate testimonies for the rapture candidates and the failures. The book is a unit, not divided in two or three parts, and is as relevant to the Church as it is to Jews or anyone converted during the Tribulation. The prophesies, says Christ himself, are for the Church, and not just for others who are “left behind”.

WAS JOHN’S TRIP TO HEAVEN A TYPE OF THE RAPTURE?

After Jesus’ letter to the church in Laodicea the book of Revelation takes a sharp turn towards a scene in heaven. John, receiving the Revelation, is called verbally up into heaven, and then taken there instantly (chapter 4:1-2).

The calling of John into heaven before any account of the prophesies is given is seen as a type of the rapture: it supposedly demonstrates what will happen to the whole Church when Jesus Christ changes us all “in the twinkling of an eye”. It’s also believed to show, since it’s a type of our own rapture, that we will be raptured before the tribulation, because John’s “rapture” occurred before any of the events of the tribulation recorded in Revelation were shown to him. The Church, according to pre-tribulation teachers, will similarly be called and taken into heaven before any tribulation events or the judgments take place.

There’s no statement that John’s trip into heaven represents the rapture of the Church-it’s just assumed that it is, because it appears to be so much like what Paul described as the rapture. However, logically speaking John had to be shown the events of the entire tribulation, otherwise he would not have been able to record them for us. If he didn’t arrive in heaven to see any of the vision until the seven bowls of wrath were being poured out, he would have missed some of the most important prophesies, and we would only have a part of the story. His vision had to begin at the beginning, and so John had to be taken up into heaven to see the beginning of the account of relevant future events. It may be just as simple as that: John’s trip to heaven at the start of tribulation prophecy makes simple logical sense, and doesn’t necessarily forecast a pre-tribulation rapture for the Church at all.

Thinking about John’s calling into heaven, I had to conclude that I would not personally want to see it as a type of the rapture, because John came back to earth as a mortal again! We don’t know that John even went to heaven physically. All we know is that when he was called into heaven he said:

Whether John was in heaven in the spirit or in the flesh, he returned to earth and to his mortal body. If he hadn’t, we wouldn’t have the book of Revelation. John came back to earth as a man and died. He isn’t in the world today. If his calling to heaven was a type of the rapture that the Church will experience, does that mean we will also return to earth as mortals, and die?

The prophetic writings of John from Revelation chapter 4 on are considered to contain different terminology than the earlier chapters containing letters to the seven churches, supposedly showing that the people living in the Church age are different to those raptured before the tribulation. Is this a valid observation? I intend to show that John’s terminology is consistent throughout his writings, showing a unity of meaning. In other words, those he refers to as “saints” in Revelation are no different than those written about and alive at the time of the writing of his gospel and letters.

A careful reading of Revelation shows that there are common terms and phrases used in John’s works, both throughout Revelation, and in his other New Testament writings. For example, He used the phrase “the testimony of Jesus”, in Revelation seven times, referring to the testimony of those saints living during the tribulation, as well as using the word “testimony” separately several more times. The “saints” found in the apocalyptic chapters of Revelation are called:

However, it’s important to recognize that the word “testimony” had also been a common theme in John’s gospel:

“…one of the soldiers pierced Jesus’ side with a spear, bringing a sudden flow of blood and water. The man who saw it has given testimony, and his testimony is true” (John 19:35).

This term is much more common in John’s gospel than in the other gospels. It’s also more common in his letters than in other New Testament letters, and more so than in Luke’s account of the early Church in Acts.

Interestingly, his word “testimony”, found in Revelation, is also found in two of his epistles to Church age disciples, as is the term, “God’s testimony”:

“Anyone who believes in the Son of God has this testimony in his heart. Anyone who does not believe God has made him out to be a liar because he has not believed the testimony God has given about his Son…” (see 1 John 5:9-12, and 3 John 13).

Therefore, John used the same term to describe Christians living in his own time, and their message, as he did for those living through the Tribulation in Revelation.

Thanks for reading! This subject will continue no more than a week from now.

*My book, “ALL LEFT BEHIND: THE CASE AGAINST THE PRE-TRIBULATION RAPTURE” by Nick Fisher, is available in paperback and on e-book from Amazon. However, in time, the entire volume will be excerpted here in this blog, re-edited, and entirely free-I’m not looking to profit from what you need to know.