Will believers really be taken into heaven before any trouble comes upon the world? That was my conviction for twenty-eight years. I was wrong.

Welcome to the fifth excerpt from my recent book, “ALL LEFT BEHIND: THE CASE AGAINST THE PRE-TRIBULATION RAPTURE”. 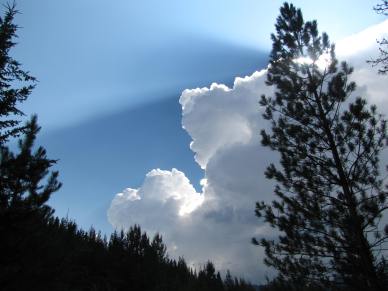 Some believe, based on the words of Paul, that there’s coming a day before the Tribulation when the Holy Spirit will be withdrawn from the earth into heaven. We’re told by Paul that Antichrist can only be revealed to the world and do his work on the earth when the one who holds him back has been “taken out of the way” (2 Thessalonians 2:3-8). The assumption drawn from this chapter is that Paul is telling us the Spirit of God is going to be withdrawn completely, into heaven from the earth, before the “seven year tribulation” begins. And since the Spirit indwells all true believers (Ephesians 1:13-14; Romans 8:9-11) the theory goes that all believers must be taken into heaven with the Spirit, because He wouldn’t leave the Church which He indwells.

When we read this passage in 2 Thessalonians we see that it doesn’t actually say that the Holy Spirit will be taken from the earth into heaven. Neither does it say that He will be taken out of the way seven years before Antichrist is revealed. Here is what it does say:

“And now you know what is holding him (Antichrist) back, so that he may be revealed at the proper time. For the secret power of lawlessness is already at work; but the one who now holds it back will continue to do so till he is taken out of the way”.

Antichrist could probably have appeared many times over during the history of man, if the Holy Spirit of God not been here to prevent him, or to “hold him back”. Hitler, for example, would have been a perfect candidate for the position of Antichrist. But Antichrist’s advent must occur at “the proper time” (verse 6). That is, when God says it’s time.

Some people think that it’s the influence of Christians in the world which is preventing Antichrist from being revealed. The Church, they say, is the restraining force holding back the Antichrist. Only when Christians get raptured and “taken out of the way” can that power of lawlessness come to fruition.

I think there’s a degree of truth in the idea that Christians hold back the forces of evil. We are, after all, “the salt of the earth”. But it seems we need a rather grandiose attitude to assume that the mighty “We” are the ones holding back the the appearance of Antichrist. We failed to hold back Hitler, and WW2 saw the deaths of tens of millions of people, including six million Jews. We failed to hold back Stalin, Pol Pott and Mao, who between them murdered over a hundred million of their own people, including Christians. And there have been innumerable other tyrants and murderers in the history of mankind. We failed to hold back the Black Death which killed a third of the population of Europe, including Christians. Furthermore, and more specifically, there is no statement in Paul’s letter or anywhere else in Scripture declaring that Christians are holding back the power of Antichrist and Satan. It’s an assumption only.

Neither did Paul say that the Holy Spirit must be taken into heaven in order to let Antichrist loose. It seems to me more likely that when the Holy Spirit is “taken out of the way” (verse 7) God will simply be removing his restraining power from a (or the) man who would fulfill Satan’s will on earth, and from the “secret power of lawlessness”. He will stop restraining the flood of evil which He constantly holds back like a dam, even now. For that He does not need to leave the earth at all.

A relevant and instructive scripture passage which reveals an important principle of Scripture is found in Romans chapter 1. Paul writes here about a people who have so turned their back on God that He literally gives them over to their sin:

“…since they did not think it worthwhile to retain the knowledge of God, he gave them over to a depraved mind, to do what ought not to be done” (Romans 1:28).

We sometimes wonder why the wicked prosper, and why they get away with the things they get up to. Unfortunately for them, it may be because God has handed them over to their wickedness. In this case, what man regards as success may actually be God’s judgment. It’s the worst thing that could happen to anyone, because he or she no longer has the Holy Spirit of God drawing him and calling him, and he’s even less likely to find repentance and salvation in Jesus. At that point, Satan has successfully and totally blinded him to the truth, because in effect, he wants to be blind.

This is the intention of God for the tribulation. His purpose in the Tribulation is not to unite the godly with the wicked, but to cement the division between them, and to seal the wicked in their chosen fate:

“They perish because they refused to love the truth and so be saved. For this reason God sends them a powerful delusion so that they will believe the lie and so that all will be condemned who have not believed the truth but have delighted in wickedness” (2 Thessalonians 2:10-12).

Second, according to several Bible passages, Antichrist will not be revealed to the world until the mid part of the Tribulation, at the time when he enters the temple and claims to be God (Matthew 24:15; 2 Thessalonians 2:3-4; Revelation 13:5-6). This, and not before, is the time when the restraining power of the Holy Spirit will be removed, mid -way through the assumed seven-year period-not before them! If believers really want to see the removal of the Holy Spirit as the event concurrent with and necessary for the rapture, they should perhaps consider themselves “mid-tribulation” believers.

Thirdly, we know the gospel will be preached during the Tribulation, and that there will be followers of Jesus, so we need to recognize that it’s not possible for the unbeliever to be regenerated without the work of the Holy Spirit:

“The person without the Spirit does not accept the things that come from the Spirit of God but considers them foolishness, and cannot understand them because they are discerned only through the Spirit” (1 Corinthians 2:14).

How then can the saints during revelation become saints, hold to the testimony of Jesus Christ (Revelation 12:17) hold on to their faith through terrible persecution and a godless world and become fearless witnesses, without the Holy Spirit?

Moreover, this view of believers disappearing into heaven along with the Holy Spirit is a little selfish, isn’t it? Wouldn’t it be harsh, cold and un-loving for God to withdraw the only possible help from his Tribulation saints? The Spirit would be the only  comfort and strength available-assistance which they would surely need in order to deal with intense persecution and upheaval. According to the Pre-Tribulation theory, while the Tribulation saints are standing up to Antichrist and intense persecution the rest of us would be enjoying first class treatment and the luxury of heaven, in return for not having to stand up for the name of Jesus at all!

Finally, it’s undeniable that Paul told the believers in Thessalonica not to let anyone convince them that the day of the Lord had come, until Antichrist was revealed (2 Thessalonians 2:1-3). Jesus spoke of the same initial sign to his disciples (Matthew 24:15-21). He did not say anything like this: “Do not to worry about the Tribulation, because you will not be here when the Day of the Lord arrives”.