Pre-tribulation teachers say that the Church’s purpose will be finished on the earth before Daniel’s “seventieth week”, also known as the Tribulation, begins, and that the focus of God’s plan will then once again be the remnant of Israel. Is this teaching clearly supported in the Bible? 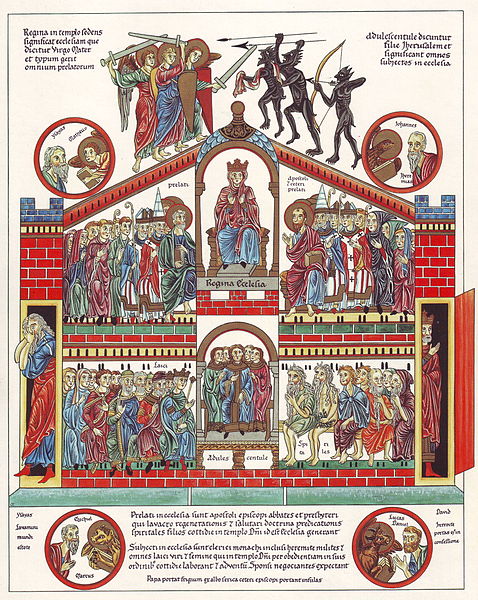 Last time I wrote a little about the Bride of Christ in relation to the rapture, and said that I will be getting into the subject of the Bride in more detail. But first I must cover other relevant detail concerning the Church of Jesus Christ.

WHEN WILL THE END OF THE CHURCH AGE BE?

The common understanding of the Church Age acknowledges that since the time of Jesus Christ, and specifically the Day of Pentecost until now, the world has been living in the “Church Age”. Pre-tribulation teachers insist that the Church Age will end before  the beginning of the tribulation, and that the consideration of any other possibility is almost heretical. The rapture will occur, and God will be finished with the Church on the earth. Jews will live through the trials of the “seven-year tribulation”, while the Church will be partying in heaven, enjoying the wedding supper of the Lamb. After this the Church, now the consummated Bride of Christ, will return to earth as a ferocious army to destroy the antichrist and his army. Is this all clearly stated in the Bible, or is it perhaps a hopeful patchwork of assumptions?

It certainly is true that Israel and the remnant of Jews will be the focal point of many activities in the tribulation, and that they are important to the fulfillment of much of Bible prophecy. There are numerous prophecies throughout the Bible indicating clearly that one objective of Antichrist will be the destruction of the state of Israel and its removal from Jerusalem, or its surrender of power over the city. Daniels “70 weeks” prophecy really does partly concern this. However, there’s no statement or obvious suggestion from Daniel’s prophecy or anywhere in the Old Testament that a multitude of Gentile believers will vanish from the world before the tribulation: the concept has to be read into such passages. New Testament scriptures used to show the same idea are very questionable. Neither Jesus Christ or Paul or Peter  mentioned anything about a seven year period of tribulation, or the disappearance of the Church before it.

THE FULLNESS OF THE GENTILES

As the scriptural hub of God’s plan during the tribulation will be Israel, does that automatically mean the predominantly Gentile Church has no place in the tribulation? Are Gentile believers really conspicuously missing en-mass from the last-days scene? Is it really all about Israel, or should we still consider Gentiles to be a concern of God at that time?

Paul wrote about the temporary setting aside of the people of Israel due to unbelief (Romans 9 to 11). This was begun during the first century. Jesus, overlooking Jerusalem, cried out:

“O Jerusalem, Jerusalem, you who kill the prophets and stone those sent you, how often I have longed to gather your children together, as a hen gathers her chicks under her wings, but you were not willing. Look, your house is left to you desolate. I tell you, you will not see me again until you say, ‘Blessed is he who comes in the name of the Lord’ ” (Luke 13:34-35).
Later, in his Olivet Discourse, Jesus predicted the destruction of the temple and the city, which occurred in 70 AD.

Paul likened Israel to the branches of an olive plant. Some of the branches -unbelieving Israel-had been “broken off” or rejected, so that “wild” branches, representing the Gentiles, could be “grafted in”. The grafting in of the wild Gentile branches has been in process for the last two thousand years. However, the rejection of Israel said Paul, was temporary:

“Israel has experienced a hardening in part until the full number of Gentiles has come in” (Romans 11:25).

At some point in the future, the people of Israel will no longer be hardened, and they will be restored, says Paul. This will happen “when the full number of Gentiles has come in”. This is a very significant clue normally overlooked or ignored.

Once again, pre-tribulation teachers use some circular reasoning here, by saying that since we “know” the rapture of the Church is before Daniel’s seventieth week, and since we “know” the Church is absent from the outworking of the prophesies of Revelation, we also “know” that the fullness of the Gentiles being come in; the process of grafting in Gentile branches to the root, will have been accomplished before the tribulation. This, they are sure, must be the end of the Church age, because the Church is said to be gone from Revelation, and only Israel and those late-comer “saints” are left behind. Is this all true?

First, please refer to my significant analysis of John’ s testimony in a previous post, in which I showed that the claim that the Church is absent from Revelation is not valid (posts “RAPTURE 8” and “RAPTURE 9”).

Next, if we go back to the account of the multitude “who have come out of great tribulation”, which occurs after the sixth seal and before the final seven trumpet judgments (Revelation 7:9), we see an amazing fact. This multitude is:

“…from every nation, tribe, people and language” (verse 9)!

They aren’t just a Jewish remnant. Also, we need to acknowledge that this great multitude, apparently from all ethnic and national groups and not just the Jewish race, having lived through at least some of the tribulation, has been saved by grace through faith in Jesus Christ’s sacrificial death, just as we are saved now in our own time:

“…they have washed their robes and made them white in the blood of the Lamb” (verse 14).

Since the fullness of the Gentiles being come in is contemporaneous with the end of the hardening of Israel, as stated by Paul in the verse above, a very pertinent question here would be, “When will the hardening of Israel end, according to Bible prophecy?” The answer to this question will more accurately mark the end of the “Church Age”, if indeed there is an end to it at all. The real answer is surprisingly accessible.

The prophesies of Zechariah give us a very clear picture of a last-days attack on the land of Israel and specifically Jerusalem, by the nations of the world. It’s when things look blackest for the Jews during the tribulation that their Messiah will, says God through Zechariah, make his appearance, and deliver the remnant. It’s at this time, and not before, that the people of Israel will receive an outpouring of the Spirit of God. They will realize just who their Deliverer is, and that they are guilty of his death on the cross:

“On that day I will set out to destroy all the nations that attack Jerusalem. And I will pour out on the house of David and the inhabitants of Jerusalem a spirit of grace and supplication. They will look on me, the one they have pierced, and they will mourn for him as one mourns for an only child… (Zechariah 12: 9-10).

“Israel has experienced a hardening in part until the full number of Gentiles has come in” (Romans 11:25).

The two go together.

As, then, the hardening of Israel ends at the visible return of Jesus Christ, which is at the end of the tribulation, how can we say that the full number of Gentiles being grafted in will end at least seven years before this event? How would those multitudes from all tribes and nations-predominantly Gentiles- come to saving faith, if the full number of Gentiles had already come in seven years earlier?

Will there not still be Gentiles left on the earth during the tribulation? Of course there will. And will God not care any more about Gentiles in Daniel’s 70th week, or any part thereof? Of course he will: his son died for them. They will still have a chance to repent and become saints. How then can they not be a part of the Church? What else could they be a part of? Having willingly been persecuted for their faith and their testimony and for resisting the world, the flesh and the devil, are they now going to be excluded from union with Christ? Such a conclusion is unreasonable, unscriptural and hard-hearted, all for the sake of invoking an escape from trials which the rest of Christianity has not been provided through the last two thousand years.

We’ve already seen the gospel, called here the “eternal gospel”, being preached by an angel all over the world, and not just to Jews:

“…he had the eternal gospel to proclaim to those who live on the earth-to every nation, tribe, language and people” (Revelation 14:6-7).

The angel can’t be said to be preaching in some past time period, or only in the commonly prescribed “Church Age”, because it’s clear from the language and message of the immediate context that his ministry is during the tribulation, and he says himself:

“Fear God and give glory to him, for the hour of his judgment has come”.

The angel’s preaching is situated between the sealing of one hundred and forty-four thousand and a warning about the mark of the beast. It is not, therefore, before all tribulation events.

What would be the point in preaching the gospel to a world which God has already given up on? Those who may respond to the gospel at that time are contrasted with those who accept the “mark of the beast” (16:9).

Here is an unmistakable evidence to the effect that the full number of Gentiles has not yet come in at this late point of the tribulation, and will not be in until Jesus Christ appears to his Jewish remnant, causing their hearts to be softened. Jesus said to the Jews:

Thanks for reading this long post. It’s an excerpt from my book “ALL LEFT BEHIND: THE CASE AGAINST THE PRE-TRIBULATION RAPTURE”, by Nicholas Fisher, available on Amazon. This post is actually an up-to-date edit. You’re getting a “second edition”, free, on this blog, and in time the entire book will be published here. Follow my blog to get notifications. Please find previous excerpts by typing in the search box. The most recent series is numbered, eg “Rapture 3”; “Rapture 4”, but you can probably enter a relevant search term such as  “The Wrath of God”.