Mankind is devolving, not evolving. Yes, we have cell phones and cars and internet, but this is development, under the temporary opportunity given us by freedom, relative peace and prosperity: it isn’t physical or cerebral change for the better… 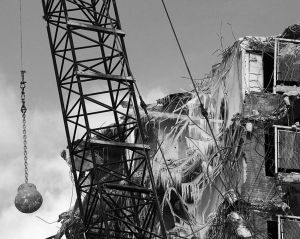 Such evolution, says the fairy story for adults, takes many millennia at least, and more likely, “millions of years”. While we poke away at our little digital devices, paedophilia is becoming the next immoral frontier to cross, sex changes are being carried out, millions of babies are being killed and thrown away before they can be born, rioters attack our emergency services personnel, and a multitude of other horrors and sicknesses develop which will ultimately bring the wrath of God on our so-called civilization.

The arts are decaying into crass expressions of the worst in human nature, while we, the “entertained”, remain transfixed by the product of technology rather than the quality of meaning and message behind it. Universalism and multiculturalism are flooding the once-strong West with division and resentment, not unity.

The West, which once fought off communism and fascism, now teeters in the direction of those very same darknesses, in the name of change.  In my country of origin, and unfortunately, in most of the Western world, people constantly decry the failures of government, and then vote into power the very same kinds of people they are whining about, i.e., weak and unprincipled. And this is in part due to media types-the ones who parade themselves as purveyors of truth, but who instead are promoters of propaganda, and whose only truth is their own twisted, uninformed, biased view of how things should be. Our cultural navel-gazing is carried out with blinkers in the dark. Our aims are not the upholding of civil life, propriety and factual enquiry, but the overthrow of what has gone before, in the vain, misguided, foolish belief that Utopia is just around the corner.

The warriors of hopelessness have successfully commandeered the narrative in education, politics and so-called entertainment. The worst in human nature has percolated to the top of the heap, and now seeks to lead the rest of humanity down the moral drain and into the sewer and the garbage bin of history. Only a few souls bravely work to hold us back from the brink, while being attacked and vilified by the lawless. Those of us who just want to live our lives and are not working to overthrow national and moral boundaries can only stand by and watch. Will the rot be in check for another four years, or not? If it is, its warriors of godlessness will be more vicious and devious than they are now.

Where will it all end? That’s the question asked by many more people than we think. And those who refuse to believe in absolutes, or in an Absolute, that is, a God who made us and therefore will hold us to account, have no hope of finding the answer. They are the willing lost; the willing blind; the blinded; the determined, cynical agnostics who are drowning in a sea of post-modernism, in which there can be no objective hope. Where it will end is in judgment. The creator of the world will not leave his creation to rot forever. Instead he-yes, I said “he”, will bring a screeching halt to all that mankind is doing to itself and to his world. The only remaining question is, are you ready for that day? Have you accepted God’s only Son as your saviour from the darkness? While you live, it’s not too late.