There are as many views about who Jesus was and is as there could possibly be about anyone, are there not? He was “just a man”; he was “a revolutionary”; he was “not a real person”; he was “deluded”.

This post will very briefly outline my own very firm conviction, after decades of serious consideration of the Bible in comparison to other faiths; of history and archaeology, and of my lifetime experiences. If you want a more detailed analysis, with scripture references, see the links below to my older posts*. This is a summary.

You could study the divinity of Jesus Christ in the Scriptures for the rest of your life, because the more you delve the more you can find to demonstrate the fact that Jesus Christ was and is no mere man, no mere prophet, and no mere avatar, guru, or ascended master. He’s is far more than all those things. 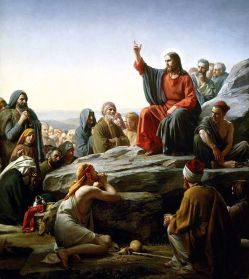 The Bible asserts that God is our savior. However, it also states that Jesus Christ is our savior. It tells us that God is “the first and the last”, but it also states that the Son of God is “the first and the last”. In scripture, God is said to be our creator, but so is the Son of God declared to be our creator.

God is our shepherd; the “King of Israel”, and “the King of the whole earth”. The Son also fulfills all these roles. Here’s an example:

“For to us a child is born, to us a son is given, and the government will be on his shoulders. And he will be called ‘Wonderful Counselor, Mighty God…He will reign on David’s throne and  over his kingdom…” (Isaiah 9:6).

Ask yourself what man can do miracles. I mean real miracles, and not the fakers who are running around claiming to be healers. With a word Jesus Christ healed lepers, made the blind see, and raised the dead. Is that the work of a man? Jesus said he “came from heaven”. He is, according to the testimony of those who knew him, and of the ancient prophet Isaiah, God-made-flesh. He is “God with us”. He is, says Scripture, The one and only, and not just “a” Son of God. He was executed because he claimed to be God, which in the eyes of the religious leaders was an unforgivable blasphemy.

Jesus stated plainly that he was One with the Father. The apostles called him God and “my Lord and my God”, and he did not correct them. Jesus accepted worship from them, something no man should do. Satan offered him the kingdoms of the world. Jesus called himself “Lord of the Sabbath”. He said that he was greater than Jonah and greater than the temple of God. He said that he is “The way, The truth, and The life”, and he said that he is “the bread of life”. He said even before Abraham was born-thousands of years earlier, he was the “I AM”.

In Jesus’ ministry he made plain that he was in all places, ie omnipresent, and omniscient. He healed all sicknesses and diseases. He had total power over the elements. He had power over death.

If you claim to be spiritual in your view of life yet fail to consider the person of Jesus Christ, you are missing out on the Spirit of God, our creator. If you claim the Bible at all as your guide yet reject the divinity of Jesus Christ, you are missing the entire point of it all: that God came to live in human flesh and to save us from our sin. If you are intentionally rejecting his divinity, you are dismantling the Scriptures which you claim as your inspiration and authority. John said of such deniers:

We need to do exactly what Thomas did when he saw the risen Christ who had just walked into a locked room, and gently addressed Thomas’ unbelief:

“Then he said to Thomas, ‘Stop doubting and believe.’

*FOR MORE DETAIL AND SCRIPTURE REFERENCES, FOLLOW THESE LINKS: