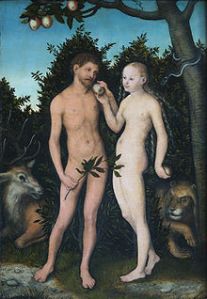 Passion is a powerful enthusiasm. If you do or feel something with excitement and energy, you are being passionate. You can be passionate about sports, slugs, singing, stamp collecting, or anything that “turns you on”. Thanks to stuffy Christians, and those just professing to be Christians, and also thanks to militant atheists and mistaken skeptics, the world has been led to believe that passion is condemned as being sinful by the Bible and by the Church. The truth is very different.

The word “passion” is often applied to the act of sexual lovemaking, and that’s the focus of my defense of Biblical passion.

In the very first book of the Bible, and in the first two chapters, we find an account of the creation of all things, including mankind. God made man male and female, and He made them for each other. He created them both “naked and unashamed”. He made them to be “one flesh”, or in other words, he made them to enjoy physical love-making as an outward expression of their union (Genesis 2: 20-25).

Please note that this is all before the Fall, which follows in chapter three, and it is before the two made coverings for themselves. Sexual expression, in its proper context, is not a sin. It did not come about after Adam and Eve took a bite out of an apple, or whatever it was. Sex is a creation of a loving God who made the two (not four) different genders to perfectly complement and fulfill each other.

God wanted mankind to, “…be fruitful and increase in number; multiply on the earth and increase upon it” (Genesis 9:7). This can’t be done (well, it couldn’t then) apart from physical union!

Jesus affirmed this union, excluding the possibility of anyone accusing Christianity of being anti-sex. By the way, he also demonstrated his full belief in what we call the Old Testament:

“Haven’t you read …that at the beginning the Creator made them male and female, and said ‘For this reason a man will leave his father and mother and be united to his wife, and the two will become one flesh?’” (Matthew 19:5).

My English tutor at college wasted half of his teaching time and my learning time, and plenty of tax-payers money, attacking the Church and Christianity in general. You may well have had the same experience at college, since many teachers now see it as their duty to poison their students’ minds against the gospel of Christ. Of course, Christianity is the only “religion” that gets attacked.

One day, while we were supposed to be studying an English classic, my tutor told the whole class that the apostle Paul was opposed to sex. Of course, the designed effect on a class of late teens and early twenties was to turn us away from the Bible and make us think that God is just a killjoy. When I disagreed openly, the Tutor offered as his supposed evidence a chapter in 1 Corinthians, although he was not willing to read it to us. If he had, we could all have had a lesson in comprehension, including the tutor, because Paul’s  intention was clearly not to stop people having sex, but instead he wanted the Corinthians, who lived in a time and place of corruption and disruption, to concentrate on Christian life. He wished that those who were able to resist would avoid marriage, but he also said:

“To avoid immorality, each man should have his own wife, and each woman her own husband….The wife’s body does not belong to her alone but also to her husband. In the same way, the husband’s body does not belong to him alone but also to his wife. Do not deprive each other except by mutual consent and for a time…so that you may devote yourselves to prayer. Then come together again…” (1 Corinthians 7:2-5).

Do these words sound like the words of a man who is opposed to sex?

What the Bible does condemn is sex without total commitment. Sex was created to be the outward expression and fulfillment of a permanent relationship – what we call marriage. This is what we should expect from a God who is love and who does not want us using and rejecting each other. Marriage is, or should be, a reflection of God’s love and commitment to us.  Not wishing to go into details here, I will just say that it is the human condition of sin and selfishness which has made total commitment such a difficult task. Commitment has been pried away from passion, and the debris is scattered all around us. Passion has been hijacked by those who want no commitment and who wish to see the destruction of the traditional family – Marx and Lenin would be proud of them. The only “winners” in our age of casual relationships are those who are still young and beautiful. They won’t remain winners for long.

One thought on “PASSION: IT’S NOT SINFUL!”